The image that we used for our introductory post was of the Bata factory in District 10 of Ho Chi Minh City. They used to make shoes in this factory. Unfortunately, the building is not currently used, which means that it is subject to demolition at any time.

The Bata company, originated in 1894 in Europe, has long been known for good design. They now have 4,900 shoe stores in 70 countries, so they are also known for being one of the first global companies. One of their first stores was this building in Prague, Czech Republic, constructed in 1929. It stands today as a modernist monument on Wenceslas Square. It would fit well in downtown Ho Chi Minh City today. 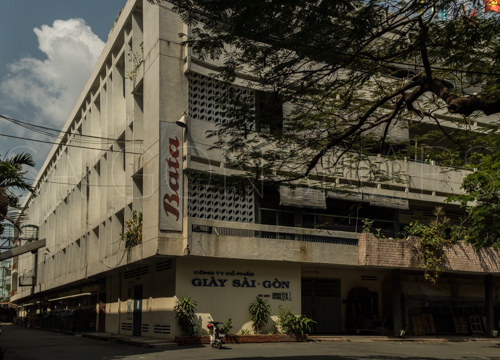 Each side of the building is different, depending upon sun exposure. The facades either have brise-soleil screens or a grid of exterior elements that make a strong cellular impression. The more open street side is in effect a double wall with the long spandrels forming an outer wall and an interior wall behind the long corridor along the guard rails. It is a very subtle touch, but the corners of the spandrels and guard rails on this more open side flare out just a bit from the length of the spandrels. These are the kinds of features and touches that make Vietnamese modernist architecture unique in the world.

Our forthcoming book will feature this building, including some very beautiful photographs by Alexandre of the corner stairs in this building and the light patterns created by the brise-soleil screens.