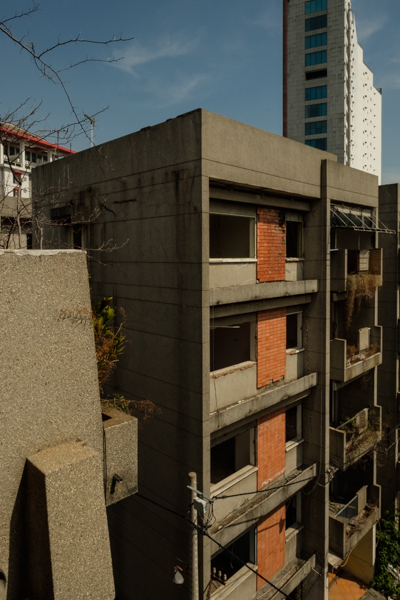 In researching and studying Vietnamese modernist architecture, we came to the conclusion that Americans had very little influence on the development of Vietnamese modernist architecture in southern Vietnam from 1945 to 1975. Although there was a huge American construction program in the 1960s, most of that was devoted to infrastructure such as airports, seaports, military bases, highways, and bridges.

But this housing project at 239 Cách Mạng Tháng Tám street in District Three did exhibit some American influence. Most Vietnamese modernist apartment buildings appeared lighter through the use of inset double-wall construction and sun-blocking elements. This building, which was being demolished when Alexandre Garel photographed it last Springtime, appears heavier because the exterior walls and windows are brought out to the sun, and balconies are added on the building rather than being inset as in Vietnamese housing. [photograph © 2018 by Alexandre Garel]

The other side of buildings 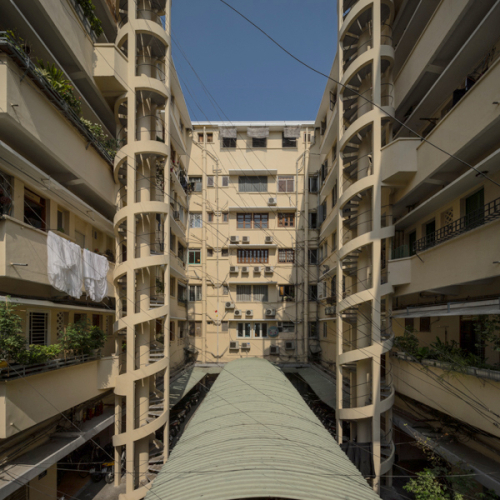 Prior to the introduction of lower-cost air conditioning, buildings were often planned to maximize through-ventilation. An apartment or an office can be laid out in about six or seven meters in width, and then an open exterior corridor would be provided. This narrow a space allowed sufficient air to pass through. On a larger downtown plot of land, two wings of a U-shaped building could each have eight-meter wide wings with a courtyard in between. These courtyards, while unseen by most people, are still a design opportunity. Here in the 95 Pasteur Street Apartments in District One of Ho Chi Minh City, Vietnamese architect René Nguyễn Khắc Schéou made the circular stairs the design element in 1949. [Photo © 2018 by Alexandre Garel] 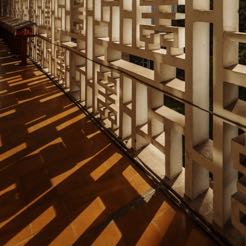 One of the defining characteristics of Vietnamese modernist architecture is its lightness and intricacy. This is often achieved through patterns of concrete screens that block the sun or provide ventilation. Vietnamese architects and builders perfected the means fo precast elements that make up a screen, or to construct the formwork necessary to pour concrete to create the screen directly on the building. The screen shown in the photograph is from the General Science Library on Lý Tự Trọng street in District One of Ho Chi Minh City. It appears that the screen was formed up on site. Considering the many buildings in Vietnam that used this technique, it is amazing that Vietnamese clients and owners were willing to pay the additional costs of such screens. That doesn’t seem to be the case nowadays. [Photo by Alexandre Garel © 2018]

Vietnamese Modernist Architecture is about Details 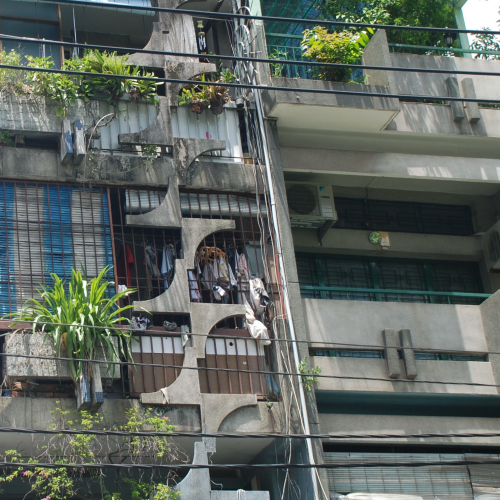 Vietnamese modernist architecture is more complex than international modernist architecture because it makes use of both functional and decorative forms in the composition. These elements are architectonic rather than sculptural — they are abstract forms that have a simple or geometric shape. Planters and guard rails are typical elements that are simple, but notice that a couple of brackets are added to help support them off the floor edge. The geometric shapes are merely decorative but are still abstract.