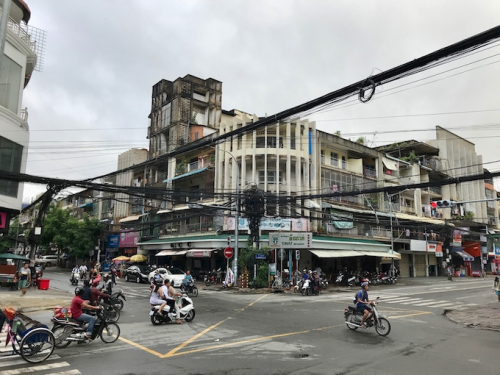 An apartment block in Phnom Penh, Cambodia, by a Vietnamese architect

Walk through the central downtown area of Phnom Penh today, and you will see many examples of modernist architecture for apartment buildings and shophouses that are very similar to Vietnamese architecture. That is partly because French-Vietnamese architect René Nguyễn Khắc Schéou had an architectural office in Phnom Penh for eight years from 1956 through 1964. During that time, he designed several projects, and other Vietnamese architects also contributed designs for commercial projects in Phnom Penh. This apartment house occupies a full city block close to the Central Market. While it looks like a string of independent shophouses along the street, there is a pattern to them that is the same on all four sides and corners because this was designed as a single building by architect Schéou. The New Khmer architecture of Vann Molyvann is the dominant architecture of Cambodia, but Vietnamese modernist architects had the most influence on commercial projects in Cambodia in the 1950s and 1960s.