The following excerpt from my upcoming book “Southern Vietnamese Modernist Architecture” provides a sense of the writing style and types of information provided.

The Independence Palace is the most significant building in southern Vietnam, and not just because it was the seat of power for the Republic of Vietnam (South Vietnam) before 1975. Since 1975 when the Socialist Republic of Vietnam reunified the country, it has not been used for governmental purposes, but rather as a museum and for occasional conferences. The building is also known as the Reunification Palace but is usually referred to in Vietnamese (including on the official website) as Dinh Độc Lập, which means Independence Palace. It is located at 135 Nam Kỳ Khởi Nghĩa Street in Ho Chi Minh City.

It is the most important building because it symbolizes Vietnam’s choice to be independent of colonialism and be a modern country. Its modernist design signifies that Vietnam had made a deliberate decision to leave the agricultural age behind and become a part of the industrial age since modernism is the architecture of the industrial age.

The Independence Palace replaced a building of the same size and shape at the same location—the Norodom Palace, the French-colonial Governor’s Palace that was constructed between 1868 and 1873. With the end of the French Indochina colonies in 1954, the prime minister of the State of Vietnam, Ngô Đình Diệm, occupied the Norodom Palace and renamed it the Independence Palace. Diệm became president of the First Republic of Vietnam in 1955.

Almost ninety years after its construction, the Norodom Palace was bombed on 27 February 1962 by pilots of two Republic of Vietnam Air Force planes trying to incite a coup attempt against the government of President Ngô Đình Diệm, and the northwest wing was extensively damaged. The decision was made by President Diệm to demolish the old palace and construct a new one on the same site, using the existing foundations.

The premier architects of the time were invited to a competition to determine a design for the new palace. As could be expected, there were several neoclassical, Beaux-Arts, and Indochine Style schemes submitted. But President Diệm selected the modernist masterpiece by Vietnamese architect Ngô Viết Thụ and construction began in July 1962. This choice was indeed a momentous decision, because it symbolized the complete break from the colonial past, and promised a modern future for the country in the industrial age. It confirmed that the culture of southern Vietnam had embraced modernism.

Construction was completed in October 1966. But President Diệm had been assassinated in 1963, so the first occupant of the new palace was Nguyễn Văn Thiệu, the chief of state of the First Republic of Vietnam, and later the president of the Second Republic of Vietnam.

Architect Ngô Viết Thụ graduated from École Supérieure des Beaux-Arts in Paris in 1955 and was awarded the Grand Prix de Rome by the French government that year. He is the only Asian architect to be awarded this prestigious prize. The prize allowed three years of residence at the French Academy at the Villa Medici in Rome to research architecture and urban planning. He subsequently returned to Vietnam to practice architecture. He also became the first Asian architect to be awarded an Honorary Fellowship by the American Institute of Architects, in 1962.

Given that the existing foundations of the Norodom Palace were to be reused, it is not surprising that the composition of the new building is very similar to the old neoclassical building. Therefore the new palace is classically organized with a symmetrical front facade.

The building facade reflects the functions within—the ends with the small windows are offices, including the offices of the president and the vice president. The central balcony opens off the lobby leading to the Diplomatic Reception Room. The primary feature of the front facade is the two-story high brise-soleil, the precast concrete vertical elements that are shaped abstractly (in tetrahedrons) to look like bamboo, an overt reference to Vietnamese culture. Vietnamese sculptor Nguyễn Văn Thế designed these sculptural columns. Ancient Vietnamese and Chinese ideograph characters inform the facade composition. This adaption to the climate and culture of Vietnam defines its Vietnamese identity.

The brise-soleil and the other ventilation openings in the facades provide a cool interior without the need to resort to air conditioning. The high narrow steel windows just inside the brise-soleil pivot vertically to adjust air movement.
While this is a modernist building, it bows to Vietnamese culture with bas- relief spandrel panels below the window openings in the wings.

These bas-relief panels represent Vietnamese themes such as dragons, tigers, and the phoenix, and are usually seen as texture in the composition and are seen as sculptures only when one pays closer attention. Fieldstone foundation walls and rusticated stone veneer at portions of the ground floor provide further texture. The complexity of this composition gives it a feeling of classical exuberance and interest, yet it remains thoroughly modernist. Most importantly, it is an expression of Vietnamese national identity. 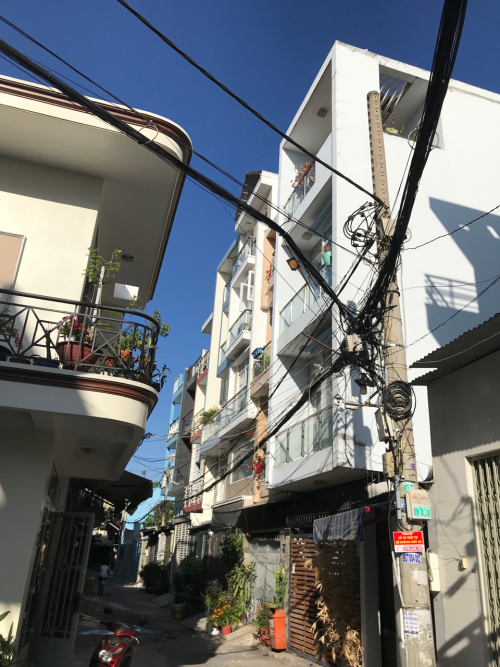 As the leaders of America take the USA into the decadence of mandating the use of Greco-Roman classical architecture, we are thankful to celebrate the Vietnamese culture in their embracing of modernism. Our forthcoming book "Southern Vietnamese Modernist Architecture" celebrates the achievements of the Vietnamese in developing a modernist vernacular architecture that represents their identity and beautifies their world.

The classicists in the U.S. and the U.K. insist that only classical architecture is beautiful and that modernism is a "hideous cultural atrocity." It seems that half of Americans believe this, which is not surprising considering the practical nature of American culture.

The marker for judging the acceptance of an architecture is what people live in. Westerners have never much accepted modernist architecture for their houses, The houses of Americans are modern, but not modernist, and are usually of historicist period-revival styles such as Spanish-colonial.  Meanwhile, the southern Vietnamese actively embraced their version of modernist architecture in the mid-century and continue to do so today. There are few other cultures in the world that have done so to the degree the Vietnamese have. You can pick any southern Vietnamese neighborhood at random and walk down the streets and find that substantially over half of the houses are beautiful modernist.

How and why did the southern Vietnamese embrace modernism? Those are the questions answered in our forthcoming book. We look forward to announcing its publication soon.

Posted by layered on 12 February 2020 at 11:33 AM in VN Contemporary Modernist Architecture | Permalink | Comments (0)