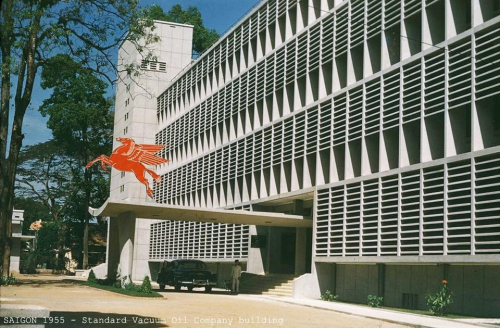 Most of the projects featured in our book were designed during that period, but all of them were buildings that Alexandre Garel could find and photograph. Therefore there were a lot of beautiful projects that we could not include. The photograph above illustrates one of the best examples of Vietnamese modernism. It shows the Standard Vacuum Oil Company building that was constructed in downtown Saigon in 1955. The building later became known as the ESSO building. Unfortunately, it was demolished in 2011.

Posted by layered on 20 April 2020 at 04:20 PM in VN Golden-Age Modernist Architecture | Permalink