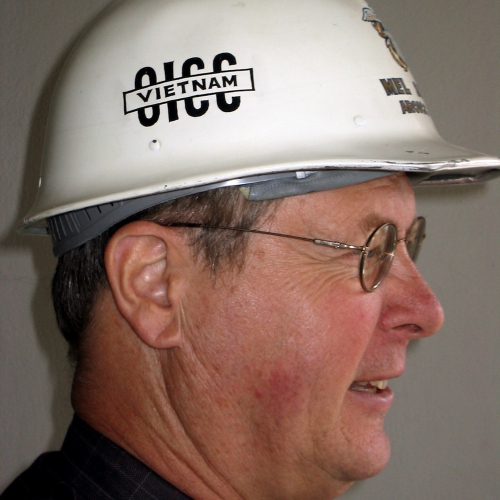 Author of the book "Southern Vietnamese Modernist Architecture", Mel Schenck is an American architect with five decades of experience managing design and construction. He earned a Bachelor of Architecture degree at Montana State University in 1970 and a Master of Architecture degree at the University of California at Berkeley in 1981. Mel began his career managing construction contracts to Vietnamese constructors for the U.S. Navy in Saigon and southern Vietnam in 1971/1972, where he  became enamored with the Vietnamese mid-century modern architecture. After several years managing architectural projects in America, Mel managed the operations of KMD Architects, a San Francisco firm with offices in Asia and Mexico as well as major cities in the U.S. He returned to Vietnam in 2006 to direct master planning for the 325-hectare Vinh Hoi Bay Golf Resort and two new towns in the Cu Chi District of Ho Chi Minh City. He leads a weekly seminar on Vietnam modern architecture and history at the Huỳnh Tấn Phát Foundation in Ho Chi Minh City for university architecture and planning students, and is a member of the Society of Architectural Historians based in America. Mel contributed the chapter on Vietnamese modernist architecture for the 2018 book “Adventures in the Land of Modernism” published by the Modernist Society in Manchester, UK. Mel’s article “The Largest Military Construction Project in History” was published in the New York Times on 16 January 2018. Mel is on Instagram as architecture.vietnam and on the internet at blog.architecturevietnam.com.